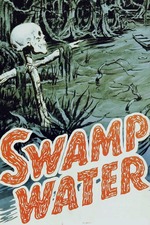 I really dug this movie, the first American picture from Jean Renoir. It has this awesome visual style as a dark Southern gothic where the dark, murky swamp exists almost as a supporting character as well as backdrop to what is a surprisingly dark movie - there's an absolutely killer opening shot, and powerful and pretty harrowing climax.

The wonderful cast reads almost as a who's who of classic supporting actors, many of Ford's stock company - Walter Brennan, Ward Bond, John Carradine and Walter Huston all have great roles here, and it's ably led by Dana Andrews.

It's not a perfect film, and large parts of the plot are glossed over - we don't find anything out about the murder itself that happened years ago, for example, or why Andrew's character so easily believes in Keefer's innocence. But the film has such a unique charm, wonderful brooding atmosphere and aesthetic (could it be the first and only "swamp noir"?) and is so unfairly overlooked that I'm giving it such a high mark. The Twilight Time blu-ray is an absolute revelation that does justice to this really beautiful little film. It may be blasphemous, but I like this just about as much as any other Renoir, and much more than a handful of them, even if his auteur fingerprints aren't all over every frame, it still is testament to his superior artistry in the medium and one of the best examples of the fruits that can be borne out of compromise with a studio.

b liked this review