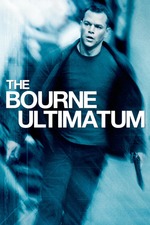 A fantastic blend of Identity's and Supremacy's strong points. It has the enthralling mystery and strong character moments of Identity, while at other points has the nonstop thrilling action of Supremacy. A perfectly satisfying conclusion to one of my favorite trilogies (even though the series continues on with two more films, they feel more like additional appendices rather than part of the extremely cohesive story of the first three). Ultimatum also happens to be my most watched film, I think I'm up to like the 16th viewing (which I know may not seem like much to some, but I'm not someone who religiously rewatches films, so for me that's a huge amount).

The Bourne vs Desh fight scene is still my favorite hand to hand fight scene I've seen. What makes that fight even better is the 17 minute long nail-biting buildup to that moment, so the catharsis of watching the climax of those events play out feels incredibly enjoyable and deserved. I appreciate Desh being the toughest opponent in all 3 films as well considering Blackbriar is supposed to be an upgrade over the Treadstone program.

While the film still does a great job at showing and not telling in many instances, given my high praise of Supremacy's nonexistent exposition I have to acknowledge that Ultimatum has the most expository moments of the trilogy. All of it I feel is completely necessary though and I personally can't think of any way to include that information without it being told.

Even though all of them are excellent, David Strathairn's Noah Vosen is by far the best antagonist. His performance is phenomenal in this film. Along with him, Joan Allen is fantastic once again as Pam Landy, who's definitely one of my favorite secondary protagonists in film. Julia Stiles is of course excellent in all 3 movies, but she gives her best performance here with much more screen time.

In reference to Julia Stiles and her character of Nicky Parsons, I absolutely love the scene where her and Jason are at the diner and she says the line "It was difficult for me, with you." Most movies and scripts would go deeper into that moment, either with some info-dump discussion or a tacked on flashback, but not Ultimatum. We move on basically immediately after that, but that one line changes her entire character and retroactively adds an immense amount of context to the first two films. That's some excellent writing.

There's some great small connections to the other films in this one as well. One being the 'Piento' passport being shown very briefly in Identity and then coming back into play here. The biggest of all though (which I guess means it's not a small connection lol) is Jason delivering the "Look at us. Look at what they make you give" line. Just like an older Treadstone agent delivers it to Jason (the new age model) in Identity, Jason, now the old failed agent, gives it to the new model in Ultimatum. Just adding a level to the cyclical nature of the corruption depicted over the three films. I find the shot of Paz lowering his gun after that incredibly significant because it shows, in addition to what he shared with Landy, that Bourne has essentially ended the damaging cycle by changing the last remaining agent's nature.