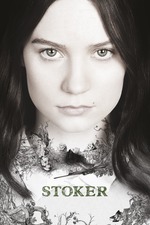 Park Chan-wook has never been afraid to go there with his work. Stoker, his first English language feature film, is yet another prime example of his flair for capturing the taboo.

Stoker is a gorgeously shot coming-of-age story about a young woman realizing, and eventually accepting, that insanity runs deep in her blood. The adult leads, Evelyn (Nicole Kidman) and Charlie (Matthew Goode), are conventionally beautiful and complex -- their outward appearances so meticulously crafted that no one would ever suspect the darkness lurking inside of them.

India (Mia Wasikowska), on the other hand, lets her strangeness show. She wears old-fashioned clothing and is bullied at school by chauvinistic boys. Her Uncle Charlie, who mysteriously appears after the death of her father, seems to be the only man who treats her well. Grappling with fantasies about her own uncle, India begins to investigate his motives, slowly uncovering the twisted truth.

The incest aspect of this film could be read as (sorry to use this word) problematic, but Chan-wook expertly pulls it off by prioritizing India's point of view. She is clearly ashamed of herself for the way she feels about her uncle, and their complicated relationship is never glamorized or romanticized. Sure, it may be the farthest thing from comfortable, but that's not necessarily a bad thing.

No matter how often I rewatch this film, the masterful shot transition of Nicole Kidman's red hair turning into a grassy field kicks my ass every time. And her monologue. And the shot of India lying in bed surrounded by shoe boxes. And the piano duet scene. And that She Did That! moment. Whatever, the whole damn thing kicks my ass, okay??