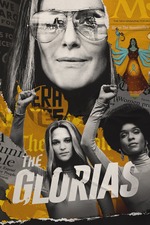 (My review for Willamette Week!)

A bus. Black and white. The only color is the yellow of the road. The only passengers are four women of different ages. These are the titular Glorias, liminal representations of legendary feminist Gloria Steinem. Two of them are Academy Award winners Julianne Moore and Alicia Vikander, the latter portraying Steinem from ages 20-40, the former from 40 onwards. Using the bus as a narrative framing device, this biopic chronicles her journey from troubled childhood to underappreciated journalist to political activist to co-founder of the groundbreaking Ms. magazine.

Julie Taymor’s direction is at its most compelling when indulging in whimsical fantasy sequences reminiscent of her Beatles musical Across The Universe (2007). Her huge swings don’t always hit as intended, but they at least differentiate it from the boiler-plate biopics that inexplicably dominate the cinema landscape. It’s exactly these sporadic creative risks that make the frequent expository dialogue and bloated storyline that much more exasperating. There’s an engaging film buried in the 139-minute runtime, and it’s a treat when it occasionally rears its head, be it in the form of co-stars Bette Midler and Janelle Monáe or the crucial amplification of intersectional feminism. Though this road trip is undeniably necessary, it’s a bit of a slog nonetheless.