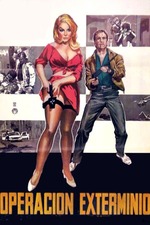 My DVD of this Italian spy film was poorly dubbed into English but in theory since the agents are an American and a Brit that almost makes sense. Still it gives the film a cheaper feel than it deserves because it has a decent budget and has some great location shooting. It is directed by Umberto Lenzi who was one of the top Italian genre directors of the 1960s and 70s - Peplum, spy, Giallo, crime and Cannibal exploitation to his credit. A lot of Italian directors took the same path; directing what was in favor at the time.

An anti-radar device has been invented and is being used to shut down radar over the world. The British and the American co-operate and each send an agent to work together. The Brit is Agent 606 (Alberto Lupo) while the American is 008, an attractive blonde female (Ingrid Schoeller). Agent 008 doubles as a nightclub singer with her cleavage a highlight and 606 flirts with her endlessly. This film seems to consist mainly of the villains trying to kill the two agents time after time after time. In various ways - the old trick if cutting the breaks, then filling a truck in which they are trapped in with monoxide, then blowing up the truck, thrown off a roof, a knife gun and electrocuting a gigantic hotel pool. It has to be exhausting - both trying to kill them and surviving.

The big plus here for me as in so many of these Euro-spy films is the location shooting. Much of the film takes place in Egypt; Cairo in particular with a side trip of course to the Pyramids and a lot of it is shot outdoors in the streets among bubbling crowds of people. The opening scene in which an informer is taken to a deserted village of mud huts to be killed is terrific and makes you wonder why the Egyptians didn't make Westerns with those dry empty landscapes. What would those have been called - Pita Westerns? The film never really has much spark to it as it is bogged down with a weak script and weaker dialogue - though you never know if that is just the dubbers making it up. At one point it pays homage to its influence with a book of Live and Let Die on a table.