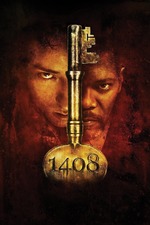 It's something that's been on the periphery of my watchlist for some time. Steven King and Samuel L. Jackson tempt me to see any of their projects, but they can be hit and miss. John Cusack was enough to keep me away from it for the decade or so since it's been out. But now I've watched it!

Cusack is a douchebag writer who specializes in books about spooky places, even though he doesn't believe in ghosts or poltergeists or the Stay-Puft Marshmallow Man. He randomly gets a postcard with the Dolphin Hotel on it that says "Don't stay in room 1408". Naturally, he wants to check it out.

After the hotel says the room is unavailable, his lawyer uses a civil rights law to get him, the white douchebag, a reservation for the room. When he gets there, the manager (Jackson) tries to convince him to not stay there. He says nobody has ever lasted more than an hour in the room, and there's been 56 deaths. They range from natural causes, to suicide, even drowning in their soup. Cusack heeds his warning and goes home. Just kidding!

Wacky shit happens left and right. Jump scares, eery vibes, shapeshifting, hallucinations? The movie throws pretty much everything it can at you, as long as it's within the bounds of the PG-13 rating. Some of it works, some of it doesn't.

My biggest hangup is Cusack. I just do not like Cusack, at all. Aside from 'Love & Mercy', I haven't enjoyed him or his sister in anything they've ever done. I don't know why. They just irritate me. So, make Cusack's character someone I'm supposed to hate, and it makes me lose any sort of empathy I could have had for the character. Even when elements of being a father come into play, I felt nothing for him. I've turned into a cry-baby since being a dad, so I'm really surprised that didn't work for me. But hooray for jump scares!