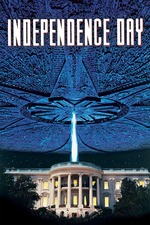 I liked Independence Day more than I thought I would. I’m not sure it was actually better than I expected; but I forgot how much I actually enjoy ‘90s Will Smith. With his recent output, it’s easy to forget. By recent output, I mean I’ve only like three of his movies since 2003, and only two of those were Will Smith vehicles (I am Legend, I, Robot).

I really enjoyed Jeff Goldblum and Judd Hirsch’s interactions, as well. Goldblum is usually someone I think I’ll like in a role, and then be disappointed. It was the opposite in this case.

After seeing Bill Pullman in two seasons of The Sinner though, I was excited to revisit his film output. Two years ago, I wouldn’t have even thought he was capable of being a convincing anything, much less a president. Of course, I’d only seen Casper and Lake Placid. But he impressed me on the show, and he was pretty all right in ID4.

Aside from green screen shots, the effects hold up rather well. I’m a sucker for sci-fi models, and ID4 has the most in cinema history.

Where ID4 falters is the ridiculously paper thin female characters.

Where ID4 fails is the humans’ winning strategy. The movie does a great job at building an insurmountable force, showing how advanced the aliens are. Then a simple computer virus is going to overcome all of that?

All in all though, it was a fun watch. I wouldn’t even mind watching it again some day. It’ll take a little more convincing for the sequel. Not only is there no Will Smith, but the child roles were recast as well. Mae Whitman has become quite the commendable actress, and I’d love to see what Buckwheat is up to these days. It could have been a Tarantino-esque jolt to his career. Ross Bagley’s IMDb bio currently ends on a rather sad note: “The success of Ross playing Nicky (The Fresh Prince of Bel-Air) led to numerous roles seen by few people.”