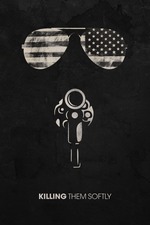 “I like to kill them softly, from a distance. Not close enough for feelings. Don’t want to think about them.”

accurate depictions of low-lives and scumbags (particularly in the beginning, when Mendelsohn has a vile line about the type of girl he’s seeing). I’ve never seen a film that depicts the 2008 financial crisis so well, and the desperation it instilled in these people (love the minor detail of the hitman taking the $1 tip off the table, and Pitt admonishing him for that). the entire film is stark, grim, to accompany the brutal and direct violence that is peppered throughout. things just happen, and that’s it. yes, the characters could’ve benefitted from being more defined. yes, some of the music choices are a bit on-the-nose (using the velvet underground’s ‘Heroin’ for the scene where they shoot...heroin). but those are minor complaints, this is pretty great overall. and the final speech about Thomas Jefferson, and America being a business, just yes. to all of it.

drug addicts, mob hitmen, counselors, scammers, thinking they’re getting one over on each other. all for money, brief spurts of power. all moving around in a haze, while voices on TV try to reassure them of the illusion. silently, bluntly victimised by an economy in total freefall. killing them softly.