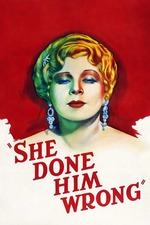 She Done Him Wrong

There are too many moving parts to just lie back and enjoy the innuendo in Lowell Sherman's ribald Mae West vehicle She Done Him Wrong, though it's not without its pleasures. A wooden racketeering story dominates the scenario, but the important element to bear in mind is that no fewer than four major characters are positively frantic to bang the quadragenarian West (as spicy saloon songstress Lady Lou), while she really only wants it from a couple of them at best—mostly Cary Grant for obvious reasons. So it's lucky for her when he turns out to be an undercover G-Man instead of a teetotaling killjoy.

Some stray notes:
-SHE'S A PRETTY SLICK ARTICLE
-MAKES THEM LOOK LIKE A BUNCH OF DISHWASHERS
-ONCE I GET 'EM THEY'RE BRANDED
-TO GET YOU, I'D FRAME MY OWN MOTHER
-THIS IS JUST MY SUMMER JEWELRY
-DIAMONDS IS MY CAREER
-A NIGHT BIRD WORKIN' IN THE DARK