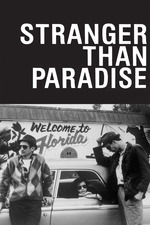 CRITERION CHALLENGE 2021: 1. A film from the year of the Criterion Collection's inception (1984)

"Does Cleveland look a little bit like, uh, Budapest?"

Perhaps the most laconic comedy I've had the pleasure to see (many times now), Jim Jarmusch described his sophomore breakthrough Stranger than Paradise as a story "about connections that are just barely missed." In it the unreadable auteur shines a dingy light on the tentative efforts at intimacy between a trio of marginalized bohemians as assimilated Hungarian émigré cum downtown layabout hipster Willie (Lounge Lizards co-founder John Lurie) first rejects and later yearns for comradeship with his droll, poker-faced teenage cousin Eva (Eszter Balint), newly arrived from the Eastern Bloc's "happiest barrack" with little more than some moxie and a Screamin' Jay Hawkins cassette. Unlike his breezy if somewhat vacant gambling sidekick Eddie (original Sonic Youth drummer Richard Edson), Willie is possessed of a mercurial temperament—chummy enough when met on his terms but with a regressive streak for aloof posturing when challenged.

Characteristic of this protean comportment is my favorite scene in which Willie—having made not the slightest effort to acclimate Eva to life in the supposed free world—gruffly terminates a halfhearted tutorial on American football (one can assume based on his speculative proclivities and the fact that the game in question was Super Bowl XVI that Willie's casual discourteousness likely stems from the vexatious outcome of a wager). Following a near dust-up when Willie is fingered for a card sharper (by claimed Nancy Spungen murderer Rockets Redglare), the natty idlers impulsively ditch their anomic Lower East Side environs to drop in on Eva and the hilariously impassive Aunt Lotte in not-so-clement Cleveland. Afterward the dysphoric duo achieve peak deadbeat status by taking a vacation from their vacation—in the process liberating Eva from the throes of Middle America.

Willie's evident insecurity is ironically juxtaposed with his dominant position within the buddies' relationship. In this imposter-stooge dyad I sense more than a little of Hegel's master-slave dialectic at play; that is to say as a key driver of Willie's quest for selfhood, his lordly supremacy over Eddie bespeaks a forlorn need to sublate another in order to see himself reflected. If I'm making this sound depressing or abstruse, please consider that in fact it's a lot of dry fun tinged with a slight undercurrent of despondency. I only highlight the point to note the unobtrusive subtlety of Jarmusch's relationship dynamics.

Like an experimental stateside Ozu (for whom Jarmusch developed an affinity from Cinémathèque Française screenings while studying abroad in Paris), Jarmusch takes a subterranean approach to character development—revealing more by way of minutiae and the unspoken than through the more conventional means of dramatic utterances and crises. He cites as his favorite moment the poignant conclusion of the opening third, in which Willie and Eddie drink wordlessly following Eva's departure to Ohio: "You know that Eddie wants to say something to Willie about the fact that Eva has left, you can sense it, but he doesn't say anything—and I think this sense that he wants to say something is stronger than if he had actually said something."

Also like his revered Japanese forebear, Jarmusch reinforces the understated nature of his narrative by employing a simplicity of means with regard to both the spartan mise en scène and the highly restrained cinematography; the eighty-nine minute film is expressed in sixty-seven unbroken long takes that are generally static (with a bit of panning) and punctuated only by strips of black leader.

Jarmusch is credited for the screenplay, though it's worth noting that he and Lurie—who met at the Mudd Club in 1978 and had collaborated a bit on Jarmusch's 1980 debut Permanent Vacation—developed the character of Willie together. Lurie also introduced Jarmusch to Balint, who he knew from his infrequent guest appearances at the Squat Theatre (co-founded by Eszter's father Stephan) where she lived and performed on W. 23rd Street. Lastly it was Lurie who arranged the beautifully discordant score for string quartet that seems theoretically counterintuitive to the muted absurdity of the scenario yet is instead a low-key linchpin (like the zither in The Third Man).

I've rambled long enough and will now leave dear readers with Jarmusch's inspired though unheeded cri de cœur from the pages of The Underground Film Bulletin: "It wasn't in our minds to be rebellious or anything formally. It was just to do something we thought was interesting and get away from this kind of horrible TV editing and language of TV and Spielberg-type editing. I hope it's gonna happen, I hope that younger filmmakers start just disregarding all this special effects bullshit and try to make simple films that are about real people's lives or about something real in some way."

Additional points to Wim Wenders for facilitating Stranger than Paradise's existence by providing leftover black-and-white film stock from The State of Things and investing in the initial short that became the film's first act. Additional points to Paul Bartel for floating Jarmusch a crucial, interest-free loan to then buy out Wenders' company and pursue feature financing.

Some stray notes:
-I CAN'T POSSIBLY BABYSIT HER FOR TEN DAYS
-IT'S DISRUPTING MY WHOLE LIFE
-U.S. OUT OF EVERYWHERE YANKEE GO HOME
-WHILE YOU'RE HERE, ONLY ENGLISH
-I AM REALLY HIS COUSIN
-I KNOW WHAT A TV IS
-WHAT DOES THAT MEAT COME FROM?
-THIS IS THE WAY WE EAT IN AMERICA
-I THINK THIS GAME IS REALLY STUPID
-I AM CHOKING THE ALLIGATOR RIGHT NOW
-THIS DRESS BUGS ME
-WE'RE A COUPLE OF RICH MEN NOW
-MADE ME MISS MY MOTHERFUCKIN' SNIFF