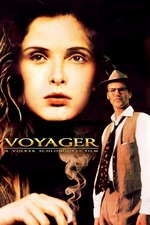 "What's providence got to do with it?"

With his twenty-year marriage to fellow director Margarethe von Trotta on life support, the highly international Volker Schlöndorff felt moved to adapt Max Frisch's psychosexual novel Homo Faber (retitled Voyager for stateside audiences largely unfamiliar with the Swiss author), wherein a hazardous crash landing provokes an inconceivable chain of coincidences that unsettle the smugly rationalistic beliefs of misogynistic, dispassionate engineer Walter Faber (Sam Shepard). Walter is the sort that brags about not reading fiction and how he enjoys "waking up and not having to explain myself to a woman"—that is to say an insufferable prick who hides behind a principle of forthrightness.

Fleeing an unwanted girlfriend in New York, Walter embarks on an impulsive sea voyage to Paris. On a whirlwind tour of Europe he meets, seduces and essentially causes the accidental death of his unfamiliar daughter Elisabeth (Julie Delpy). In fairness, though, it isn't like Walter's a deadbeat or anything; rather, for years he labored under the misapprehension that he had successfully dragooned Elisabeth's mother (Barbara Sukowa) into terminating the pregnancy (as well as their longtime relationship). Thus Walter had no idea that he needed to be so selective when choosing his unbecomingly young sexual partners. To its credit, the film offers no resolution for Walter—who is instead left in a state of anguished transfixion à la Tommy Wilhelm in Saul Bellow's Seize the Day.

Voyager is well-acted at least (which is not a given for Schlöndorff), though with Frisch's political subtext removed the once-allegorical scenario all seems a bit pointless. Given its taboo themes, Voyager could also stand to be somewhat livelier in my estimation. But what do I know? Professional moaner David Thomson calls it "a chilling study of inadvertent incest".

Some stray notes:
-THEY BARBECUE DOGS IN TAMPICO
-OUT OF THE JUNGLE—INTO THE FRYING PAN
-IS THIS TRUE? ONE WORD?

She Done Him Wrong