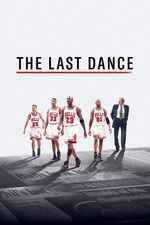 superbly paced and edited. the filmmakers here brilliantly weave in various storylines from Jordan's life and career as touchstones for exploring his final 97-98 season. jumps in the timeline never feel like padding for time (impressive for a 10-hour documentary), but rather anecdotes from the past are always instead used to illuminate some aspect of the final season and/or Jordan's psyche.

The Last Dance has received some amount of criticism from "serious" documentarians i.e. Ken Burns regarding MJ's veto power over the documentary and the fact that he is clearly driving the narrative. they're not entirely wrong. it is a bit disappointing not to get more of the point of view of MJ's rivals; Isiah Thomas in particular gets short shrift. and while the filmmakers do get to touch on some of the more unsavory aspects of the Jordan legacy like his infamous apolitical public stances or his absolutely insane competitive sociopathy, Jordan always gets in the last word of defense.

but it's only a minor demerit for me. plenty of documentaries editorialize and that's okay. not every documentary has to be edutainment. this is clearly the story of the Bulls from Jordan's perspective, and it literally couldn't have gotten made any other way.

and i think the filmmakers and MJ ultimately deserve credit for broaching the more controversial topics, because even if MJ always gets the last word, the viewer is free to accept or reject it. when MJ claims his "Republicans buy sneakers too" was a casual joke and that he couldn't endorse Harvey Gantt for Senate against open racist Jesse Helms because he "wouldn't speak out of pocket about someone i didn't know," the viewer is still free to see this as a cowardly response. when MJ claims his vicious badgering of his lesser teammates was as much for their benefit as his, the viewer is free to see this as hollow self-justification too.*

of course, we know this story ends with a triumphant, dominant MJ, so he gets the final word just like he did in his playing career (a follow-up documentary on his terrible performance as the owner of a pretty bad franchise, which must be a living Hell for him, would be interesting in its own right), and the documentary appropriately ends with the undeniable truth that love him or hate him, Jordan and the Bulls really did transform world culture. a biased documentary, sure, but still a riveting one that poses many interesting questions if the audience thinks to ask them.

*Pippen gets short shrift too, one of the most beloved teammates of all-time who almost certainly held the team together in the face of Jordan's verbal and physical onslaughts and his story is largely about his contract disputes. i highly recommend Zach Lowe's recent ESPN.com article on Pippen to get a sense of how crucial he was to the dynasty.