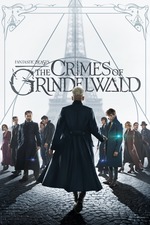 Fantastic Beasts: The Crimes of Grindelwald 2018 ★½

Ya bitch saw this mf in 3D
Here’s some notes I took because I had no idea what the hell was going on!!!!

- Somebody needs to tell me if Zoe Kravitz spoke in a British accent during the movie, cause wouldn’t that go against JK’s British purity wishes?
-Newt in French dubbing is apparently Norbert

- Why didn’t they just cast an old actor as Nicholas flemmel, that makeup was weird as hell
- They really milked the hell out of Newt’s bad posture, Yates might as well have told Redmayne, “just do Hawking again.”

- Multiple characters looked straight into the eye of the camera?

- Damn grindelwald is a vape god

- Are there zero muggle detectors for Jacob??? How is he getting past all of this without security?

I actually really like the idea that Dumbledore and Grindelwald’s story is getting told but I have no fucking clue why they’re making Newt and company such a big part of it. It’s a no from me dog, this was a mess and the ending was the most anticlimactic shit ever. The good news is that it felt a lot shorter than 140 minutes.
* seen in French

Harry Potter and the Philosopher's Stone