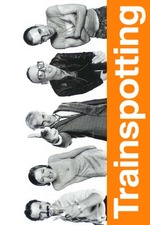 "Choose life... But why would I want to do a thing like that? I chose not to choose life. I chose somethin' else. And the reasons? There are no reasons. Who needs reasons when you've got heroin?"

What makes a film about the joys of doing and trying to get off heroin so appealing to someone who's never taken any narcotics harder than Lorezepam (Only when in the midst of an anxiety attack and even then, usually only half a pill.)? And not only appealing, but a favorite film? That's not an easy question to answer.

I first saw Trainspotting on VHS in 1997 and it struck a chord with me. I'd seen Ewan McGregor before in Danny Boyle's Shallow Grave, also a movie that I absolutely loved from the moment I first set eyes on it, so I was interested in what they'd gotten up to this time around. Just as in Shallow Grave, McGregor plays a smartass, conniving, little bastard and is clearly having a blast doing it, though Renton's not nearly as ambitious as his Shallow Grave character, Alex. He's just looking to score. Everything else is secondary.

His friends aren't in any better shape. Perhaps worse. But these people all have something about them that compels one to like them and to be concerned with what's happening with them. Especially poor Spud, who can't catch a break.

But there's just something about how it all unfolds. Boyle could have made a more literal film that could have been equally compelling, but he chose to take some great visual liberties with it all. For example: One of the most infamous scenes in the film takes place in the filthiest toilet in Scotland. Not just in the restroom, but in the toilet itself as Renton crawls inside and swims around to find the suppositories he just shat out before they had a chance to melt. Then when he finds them and thrusts them triumphantly from the toilet bowl, said suppositories glow as if they're the Holy Grail itself. How could I not love something like that?

Plus, it was my introduction to Kelly Macdonald.