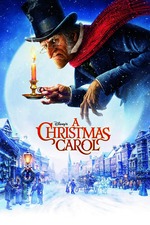 For a story all about emotional and ideological transformation, I'm confused by how stifled this adaptation is. It's as if Zemeckis wanted to stay loyal to the source material but also give it a bombastic update which results in a lot of tonal whiplash and a lack of resonance. Every genuinely atmospheric or creepy moment is undercut by something excessively ludicrous or goofy, to the point where you're left wondering who this is even aimed at. I don't know anyone who felt the things lacking in Charles Dickens' classic tale were nightmare fuel imagery and action sequences. The motion capture allows for some fantastic visuals (the opening credits are stunning) but the characters all have dead-eyed expressions and move like they've just been thawed out of ice. It's also distracting to have the same group of actors play everybody without changing their voices, it only reinforces the video game comparison.

At least this appears to have been the film that finally convinced Zemeckis that people find this style to be more unnerving than endearing.