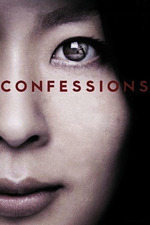 If you've ever wanted to see a revenge thriller that is shot and edited like a late-2000s metalcore music video then this is the film for you.

Confessions starts out very strong. The entire first act, which takes the form of a prolonged monologue, is so impressively constructed and delivered with such intense visual verve that I thought we could be heading into superlative territory. Unfortunately, my fears that it was too front-loaded were confirmed by what followed. The twist-laden plot about a teacher getting retribution on the students who killed her daughter does set up some interesting ideas on violence begetting suffering, moral decay and the cruel nature of adolescence (from someone who was one, I can confirm that 13 year olds are pricks). The issue is that it basically ignores exploring them in favour of creative and startling imagery. It's an approach that rationally leans towards dynamism, but it causes a lack of emotion given the tragic situations and neglects development of the pupils so they all come across like a group of clones.

Both the strengths and weaknesses of Tetsuya Nakashima's highly stylised direction are on full display here. His ability to craft a palpably unnerving atmosphere through striking compositions, muted colours, bursts of brutality and perfectly integrated needle drops is truly outstanding. However, the narrative gets hindered as a result; there's just a few too many plot points that feel poorly envisioned and bordering on nonsensical to work as intended. It is certainly engaging at that surface-level, but I'm not sure if it offers too much beyond that.