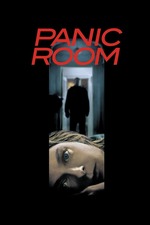 Panic Room is an unfortunate victim of circumstance. It finds itself sandwiched between David Fincher's two best films and ends up fading into the background as one of his lesser works. It's a shame because this is still a mightily entertaining effort. It is clearly his attempt at making a pure popcorn thriller and is a first-rate example of such.

The high-concept premise allows Fincher to play to his strengths by placing emphasis on building tension and using the claustrophobic setting to his advantage. He crafts a number of effectively suspenseful set-pieces (including a sequence that does slow motion right) and smartly increases how fraught the situations are. He also uses the film to experiment with his camerawork. The subtle use of CGI to create the vast house means the camera is almost always moving and shifting prespective. It can get a touch showy but it does add a needed dynamism considering how contained the story is.

The script by David Koepp is extremely tight, we get as much background information as necessary and jump straight into the story. The cast helps in this regard. Jodie Foster and a young Kristen Stewart provide a believable, sympathetic portrayal of mother and daughter. Forest Whitaker, Jared Leto and Dwight Yoakam all succeed in giving their crooks distinctive personalities. The strength of these performances is that they suggest entire backstories with very little which means the plot and pacing aren't bogged down by needless exposition.

For me this feels like the closing chapter on the first half of Fincher's career. The last of his vibrant thrillers and certainly his most Hitchcockian effort. Importantly it is also further proof that a director with vision can make seemingly lesser material work.