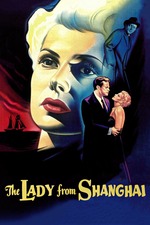 The Lady from Shanghai

Starting to think that I'm just not a big fan of Orson Welles because I found this to be mildly diverting fluff in all honesty. Reading that his original vision was butchered in post-production comes as no surprise (it's basically his directorial trademark, sadly) as the entire narrative feels jumbled in a way that doesn't evoke the kind of mystery or tension that was probably intended. It's packed with the types of twists and double-crosses that you'd expect from the noir genre, but the haphazard editing and rushed pacing make it difficult to savour moments and absorb the seedy atmosphere. It gets sturdier as it advances, the courtroom scenes are particularly enjoyable, but it feels like there's a lot of padding before we reach that point. Rita Hayworth is an effortlessly alluring femme fatale and Everett Sloane is amsuingly venomous as her husband, though I'm not sure what Orson Welles is doing as his terrible Irish accent is distracting and makes his omnipresent narration rather grating.

The famous hall of mirrors culmination is a clever concept and well constructed, but I don't think there's enough in the convoluted storyline to really sustain interest until it arrives which results in it lacking the neccessary intensity given what's at stake. It's a brief surge which doesn't leave a considerable impact.