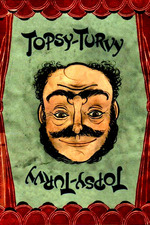 I can imagine that Topsy-Turvy seemed like an unanticipated and potentially risky deviation for Mike Leigh at the time. A large-scale, light-hearted period piece revolving around Victorian era collaborators Gilbert & Sullivan as they assemble their comic opera The Mikado appears to be completely at odds with the sobering nature of his works prior. So it's a true testament to Leigh's versatility that he was able to reconfigure his naturalistic, semi-improvised approach to comfortably fit the material. He constructs a comprehensive insight into the creative process; covering each facet of production, from writing and conceptualising to rehearsing to costuming and composing to accounting, whilst retaining a zestful fluency so that the storyline is never impeded or overwhelmed by detail.

The tension pervading the central partnership comes from a clash of dissimilar personalities rather than anything malicious, astutely capturing the pressure an artist feels when placing themself on the line. It keeps the jovial tone without undercutting the more earnest aspects and feeds into one of Leigh's reoccuring themes of people learning to accept their differences. He also displays his fine skill at carefully crafting some kind of motivation or backstory for all of the key ensemble, continually shifting focus to include all involved with the Savoy Theatre; through their backstage antics (which contain plenty of inspiration, confusion and disagreement) they come to resemble a close-knit family. It's a technique that does lack the depth usually associated with Leigh's efforts and feels scatter-brained initially, but it pays off as the various threads align.

It helps that the visual style and performances are both excellent. The theatrical backdrop is well realised; the vibrant production design, makeup and costumes make this a feast for the eyes as well as a suitable recreation of the time. The actors deserve a lot of credit given the vehemence of the roles and musical numbers (especially as they all perform their own singing). Jim Broadbent is the standout as the temperamental perfectionist Gilbert, his incensed ramblings and unfazed strictness provide some of the funniest moments, yet Allan Corduner holds his own by bringing a charming warmth to the ambitious optimist Sullivan. The supporting cast is packed full of reliable talent with the likes of Lesley Manville, Timothy Spall, Martin Savage, Ron Cook and Shirley Henderson infusing their parts with verve.

Although it takes some time to find its feet, the pacing is exemplary once it hits its stride. For such a playful film to be almost 2hours 40minutes long and flow so smoothly is very impressive.

The Mitchells vs. The Machines