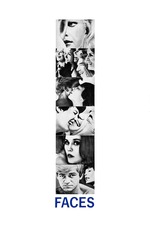 Faces is about the faces which are constantly being scanned by the probings of a hyper-attentive camera. Faces which make faces when they set into ridiculous or unhappy expressions. We know very little about the characters behind the faces - the investigation is only concerned, precisely, with what their faces betray: excitement, desire, fatigue. Nuances of mood or fine psychological distinctions do not enter into it (which is perhaps why it is hard to think of the film in any other format than blown up 16mm).

Which is also why the film gives the impression of being a thorough investigation which, however, uncovers nothing at all; the film's subtle probings proceed apace, but the frequent irruptions of violence (divorce, suicide) are left unexplained. It seems such a scandal that the spectator begins to think that whole scenes are missing, in particular, that of the suicide - how did it happen? and why?

What, in our view, is so fine about Cassavetes' film is that it makes us aware of one of the weaknesses of the cinema: its right and proper inability to explain the inner world, since all it can literally grasp are external signs, as being not unrelated to inner turmoil. As if the silence to which the inner world has been relegated by any self-respecting cinema were the background against which a cry, silent in the echo of its own emptiness, could issue forth.

Like films by Godard, Straub and Lefebvre, Faces is one of the great films of emptiness, heart-rending, as for all its dizzy emphasis on the external it gets drawn into the most unsettling of inner worlds. Which could be defined, in this case, as the total loss of direction experienced by the individual American. The various bouts of vertigo, nausea, depression or madness, leading up to or following on from drunkenness that we see in this film might well be regarded as discreet metaphors for this malaise.

Except that there is nothing to literally authorize such generalizations about the film's symbolic meaning. What we most admire about the film is that it has borrowed from the effects of alcohol - heightened awareness and lucidity, moments of emotion and flashes of insight - the very form, unsteady and rigorous, of its poetry
Sylvie Pierre

A project - that of Faces - which involves the same team and the same community for three years, which is the interlocking point of so many lives and adventures, which becomes, if we are to believe one of the team, Cassavetes, as much a part of, as necessary to each of the participants as the air he breathes, such a project distinguishes itself immediately as being radically different from the models which normally regulate the conception and elaboration of films. Indeed, the cinema offers few examples (Rouch, Perrault, Rivette) of an approach which follows the rhythms of daily life so very closely that it soon becomes impossible to draw the line (if indeed such a line still exists) between film and non-film.

For the same reasons, a change of some importance comes about in the very nature of the work: the preparation and the shooting of the film no longer define, as is usually the case, a reserved area in space-time, a privileged enclave, protected and as it were disinfected, at all events more or less successfully kept away from possible contamination by the real world and the laws of society; the film is no longer that representation of itself which society not only authorizes but encourages, not innocently either, even when it seems to be putting obstacles in the way and showing disapproval; that critical examination of which the cinema is capable is no longer being conducted from the 'correct' vantage point, from the 'right' distance, as defined in the rules - hence, all too often, an illusory distance and criticism, non-existent and ineffective.

On the contrary, in a film like Faces, where film time and lived time merge, where the actors/authors (character-making characters) are making the film and leading their lives all at once, the rules of this society game which is what the cinema is nine times out of ten are broken from the word go. Also violated by this new breed of film poacher are the frontiers, barriers and prohibitions which seek to make the cinema into some kind of isolated area dominated by the false idea that 'everything is possible', a miniature version of the 'real' world, a private hunting ground where, according to convention, only blank shots are fired. Let us say that Faces no longer lends itself to the role traditionally assigned to the cinema by the 'spectator society', that of a mirror declared to be 'impartial' - that is to say, in reality, completely determined by the object it reflects. What the film sends back to society is no longer a more or less faithful image of itself, but something quite different: a partial and biased view. ..j; Faces might have been, like so many other American films, a more or j less complacent reflection of American lower middle-class life: by virtue, however, of its narrative principles, themselves linked to the principles which underlie the shooting, it rejects the descriptive function habitually allotted to the cinema. The lows and occasional highs of four ordinary Americans, city-based men and women, are not described in so far as they are not the fictional reproduction of actions or gestures which have or might have already taken place in an elsewhere supposed to be more 'real' than the film, and on which the film would attempt to model its realism. In a number of ways, through the time involved in the making of the film, the use of amateur actors and the disorienting effect, both cinematographic and economic, of the 16 mm format, it is the movement of the film itself which produces the behaviour patterns, the relationships, the fiction and the characters. The latter, as they get worked up, shout, laugh and above all talk on the screen, are not pretending to replicate the sound and fury of an existence or story which exists outside the film, they are not miming anything for the purposes of the spectacle; nor are they small-scale models of their contemporaries and fellows, and nor is the film a parable or a fable.

Caught in the film as in the very trap of their existence and subject to its rhythm, the characters in Faces are not stock characters; they are not predetermined, or put there once and for all, arbitrarily, at the beginning of the film; rather, they define themselves gesture by gesture and word by word as the film proceeds. That is to say that they are self-creating _ the shooting is the means whereby they are revealed, each step forward in the film allowing them a new development in their behaviour, their time span coinciding exactly with that of the film. Once that is the case, cinematographic realism is out of the question: called into being by film, moulded by the peculiarities of the shooting and of the project in general, the characters - who are the one and only source of the fiction - no longer refer to some plausible real-life situation, of which they would be the more or less respectful representation; they are coherent and plausible only in relation to themselves, and in the context of the film itself. Certainly, there is nothing we see on the screen which has not also happened 'in real life', but 'in real life', in this case, means in front of the camera and through the camera. Cassavetes and his friends do not use the cinema as a way of reproducing actions, gestures, faces or ideas, but as a way of producing them. We start from scratch, they say: the cinema is the motor, the film is what causes each event to happen and to be remembered.

This kind of spontaneous writing in film is based, in Faces, on the extreme mobility of the cameras and framings on the one hand, and of speech on the other. The use of two cameras, which does away with the notion of 'linking up', immediately creates the impression of a natural continuity in space and time, a space-time in perpetual expansion, such that you have the sensation not only of fluidity but also of speed: the variations in scale of the shots, the changes of angle do not break up the movements of the characters but emphasize them, add to their mobility and variety, keep the momentum going and increase it, so that through the combination and multiplication of these two mobilities (within and between frames) a general movement of the film is created which gives the impression of itself creating, through its own means, the individual movements which make it up. It is as if the rhythm of the film were self-generating, once the initial thrust is given and the momentum established. In this way, as far as the development of the fiction is concerned, a purely formal logic (relating to sequences of movements) is substituted for the psychological scheme which the characters' behaviour would otherwise not have failed to introduce into the film.

The other thing that flows continually in Faces and brings the film to life is speech. Here again, the film works in terms of escalation and chain effects, in this case a never-ending stream of phrases, a free-wheeling mode of discourse which soon robs words of their points of reference, which makes the meaning of words less important than the way in which they are spoken and the patterns they create, so that what might have been a film about faces and gestures is also in the end a film about the wanderings of speech, about a time span occupied by speech and movement, that is to say, a cinematographic time.

Hour of the Wolf