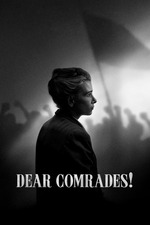 Andrei Konchalovsky’s (must check out more of his work) latest film depicts the 1962 massacre in Novocherkassk of protestors against hiking food costs in the Khruschev era, seen through the eyes of Lyudmila (Julia Vysotskaya), a government official and Stalinist devotee. She finds herself in a most difficult predicament on this ill-fated day as she struggles to reconcile her professional advocation of deadly force for the protestors, with her desperate search for her missing daughter (Yulia Burova) amidst the chaos. It's a slow burning build, and I'll admit I was a bit disengaged at points, to the massacre at the halfway point which is a masterclass in artful, yet harrowing direction, whether it's the use of cinematography, music, sound work and editing.

There have been comparisons made to Pawlikowski's works and I can see that even beyond the B&W cinematography - it achieves an almost paradoxical blend of detachment and emotional impact. The stillness with which the camera lingers on the finer details even in the loudest most kinetic sequence is quite remarkable. It is film that is at its most striking at its most intense, occasionally veering a bit too far into the overly melodramatic, but always the very least memorable in its execution. The more understated sequences of Lyudmila dealing with her culpability are also effective, and the film even manages to get some deadpan laughs out of the bureaucratic ineptitude of the government officials.

The film's epic scope is anchored beautifully by Vysotskaya, who blends a mother's desperation, a seething bitter stubbornness in longing for Stalin's USSR, and haunting reactions of horrors around her. If I had a reservation, it is that it perhaps begins and ends on a lesser note to the rest of the proceedings, not to say in a bad way though, and this could easily go up on rewatch.

Do hope this makes it in as an International Film nominee at the Oscars.