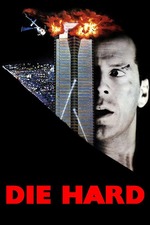 This is the first time in over a decade I've rewatched this and, I hate to say it, but I don't think DIE HARD has aged that well.

I completely understand why it's a film so influential in the modern action movie genre, and why its screenplay is so often used as the template for so many successors. John McTiernan is great at staging elaborate action setpieces and constantly keeping the suspense going for two solid hours. It's a tight story, filled with setups and payoffs, and the director does a great job throwing conflict upon conflict onto our lone hero as he singlehandedly takes down a gang of villains in the skyscraper he has gotten himself trapped in on Christmas Eve.

But looking beyond that, every single character is so incredibly stock and one-note, right down to the casting. Reginald VelJohnson as a buddy cop, Paul Gleason as an incompetent authority figure, William Atherton as an arrogant prick...it's like a Who's Who from the typecast phonebook. All the other characters are very on-the-nose as well: Ellis is a sleazy businessman who only exists so he can be wrong about everything, talks like the cliche of an '80's stockbroker, and causes his own death in a move you see coming a mile away. The two FBI guys are mindless bureaucrats, and they're both named Johnson just to drive the point home. Argyle the limo driver is a smartass token black kid. The McClane housekeeper is an undocumented Latina immigrant. It's just cliched character after cliched character.

Bruce Willis and Alan Rickman are good in their iconic performances as hero and villain, playing a well-orchestrated game of chess. They do slightly play into their archetypes (all-American cop who talks like a cowboy vs the smug European who thinks he's an intellectual but can't compete with American ingenuity) but they are both so good that you come to enjoy them.

Then there's Holly, who exists solely for the purpose of giving McClane a personal investment in the hostages, which is pretty much the same role she would serve in the sequel. We get some brief expository dialog about their marital difficulties and how McClane and her are reconciling, but you never really care. McClane's relationship with Sgt. Powell ends up carrying more weight than the marriage ever does and is the real heart of the film. I should make it clear that Bonnie Bedelia is perfectly fine and gives the best performance she can with the material, but I would have liked to have seen a Demi Moore-type in the role, who had a little more grit.

In addition to having an anti-European subtext, the film also has a prevalent anti-west coast subtext. As our New York hero discovers, the entire LAPD is incompetent, the FBI is incompetent, the news media is incompetent, and even the yuppie hostages are incompetent. Oh sure, LA does have a few good apples, such as Powell and Argyle, but overall, none of these people can compete with a New Yorker's knowhow.

I have no problem with a movie relying on cliches and stock characters when it's done right or when it has a little more to its premise, but DIE HARD is simply what it claims to be: a blow'em-up action movie with explosions and one-liners. When it comes to action movies of this same era, I much prefer ALIENS, ROBOCOP, or the first two LETHAL WEAPON films, which all have way more character development. Still, I give DIE HARD points for being an escapist action park thrill-ride that gives you exactly what it promises.