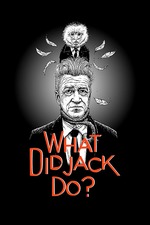 WHAT DID JACK DO?

"Lynch believes in the romance of Tootatabon and Jack as much as he has any other pairing in his career. They’re as real as Ed and Norma or Sailor and Lulu. They just happen to be a chicken and a monkey. It’s absurd. It’s funny. But it’s also moving. When Jack finally begins to talk about what actually went down he begins to speak openly about Tootatabon. He describes their romance as being like a banana. “Soft and sweet inside with a golden hue.” This is a joke, but Lynch is also being completely sincere. Near the closing there’s a cut to a dream space. A love song in a minor key trickles in and Jack takes the proverbial stage; he sings his heart out about what he’d give to see Tootatabon one more time. It’s a song that’s so sickly sweet and sincere that it could come off as corny for anyone else, but with Lynch he hits exactly the right notes of melancholy. This song plays in a similar register as much of the frequent musical diversions of his career. It immediately recalls the Lady in the Radiator from Eraserhead and Julee Cruise in Lynch’s Industrial Symphony project. Lynch’s melodrama and his belief in love works, because he’s also actively acknowledging that these things don’t exist forever. Things like time and death and life get in the way of beauty, and he loves that disruption just as much as he believes in the power of love. It’s why these songs are always sad. These characters can’t take it with them, because to live is to lose things in real time. In Twin Peaks Ed and Norma only get to be with each other at the very end of their lives. So much time has passed. They’ve lost so much in the process. It’s beautiful, but it’s sad and Jack’s song to Tootatabon realizes the exact same things. "