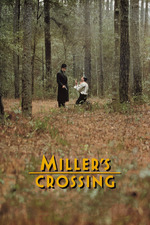 In classic Coen brothers fashion, this film blends riveting dialogue with excellent cinematography and a dash of absurdity. Despite the gravitas subject matter of organized crime bosses and their politics, this movie maintains tones of irony and wit such that the audience is never too captivated by the dirty deeds or the violence, but far more absorbed in the humor of the circumstance and the anticipation of what ridiculous happening may take place next.

Miller's Crossing takes place in a world where mobsters are chiefly focused on feeling superior to the competition. Be it their smarts, their status, their success, or even their integrity in question, the crime bosses in this film are concerned with protecting their image (which is often represented by a hat).

In addition to symbolism, the filmmakers deploy uncertainty to keep viewers on the edge of their seats. The lead character, Tom Reagan, seems to teeter back and forth between mastermind and manipulated. At times, he looks like the true genius, moving his colleagues around as if they were chess pieces. In other moments, he seems to be grasping for any angle at all as trouble closes in on him from all directions. Throughout, his intentions and his motivations remain in question. Even in the end, whether his victory was the result of cunning brilliance or good fortune is up for debate.

For fans of dry and dark humor, Miller's Crossing might be deemed a masterpiece. However, to suggest this film is an enjoyable experience for all movie-lovers would be misleading. It is brilliant in many respects, but niche in every sense of the term.