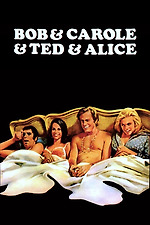 Bob & Carol & Ted & Alice appear to live in the same neighborhood as the Braddocks and the Robinsons, but things have gotten a bit groovier in the two years since The Graduate. 1969 has come to be seen as the tipping point of a new age. Man is on the moon, and God is dead. Chesterton tells us with a snigger, the first effect of not believing in God is to believe in anything. Human Potential Movement, embracing complete openness, free love. Bob & Carol want to be on the cusp. Ted & Alice are skeptical. Therein lies the humor of this movie that’s structured a series of sketches. Netflix could remake this as a 6-part binge.

The predictive power of the film on future history is interesting. The American Marriage followed the same course as Bob & Carol & Ted & Alice, it flirted with the new sexual frontier in the late 60s and 70s and then retreated back to a more comfortable territory in the 80s. The hangup-free flings of 1969 become fatal attractions in the 80s.

In some ways the movie is a more distant period piece than the 1950s Billy Wilder comedies or Douglas Sirk melodramas. I understand the world of the ’50’s better that the dawning of the Age of Aquarius. I sense there is a lot of satire that I’m missing, like when my 10th grade teacher had to explain what Swift was attacking in Gulliver’s Travels. Does satire cease to be satiric with the passing time and a loss of understanding of the original cultural setting? Will one day people watching the movie think that this is what marriage was like in 1969?