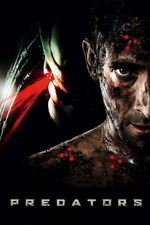 So this movie has been on my mind since the giant cluster that was The Predator crashed last year.

Its...pretty damn good, tbh. Adrien Brody is a strange pick for action sci-fi, but he does a good job. Most of the rest of the cast I don't really recognize, besides Topher Grace in a weirdly pointless but decidedly creepy role. There's no particular reason for this character, beyond setting up the ending in a way where the humans can conceivably win, but Grace seems to enioy playing seedy characters, so he does it well enough. This film also has Lawrence Fishburne and Danny Trejo. Fishburne plays an insane Vietnam veteran who betrays the group, and Trejo plays a member of a drug cartel.

Otherwise the cast is mostly people I’ve not seen since. They’re a collection of dangerous individuals-there’s a Russian mercenary, a Yakuza assassin who has the hands-down best death in the movie, a serial killer, a female Israeli sniper, a member of an African militia, and Adrien Brody as an American mercenary.

The twist to this movie, and it’s a lot better than the silly bullshit lumped into The Predator, is that this group has been collected by the Predators and dumped onto a jungle world to be hunted. The reveal scene where they realize they’re not on Earth is pretty cool, with a sky full of moons far too close and numerous to be our planet.

The film also expands the Predators a bit, by dividing them into two clans or maybe subspecies. There’s a bigger subspecies whose faces are different, as are their weapons; they also have a habit of integrating bones from their kills into their masks, which is genuinely creepy at several points, and there is the normal variety we’ve gotten used to over the years, who are seemingly at war with the other side.

I’m going to leave this relatively plot-free, because, well, people should watch this movie and if I give a beat by beat description of the movie people might not bother.  What I will say is that this is the only Predator sequel that really expands on the original in a good way. Predator 2 is just not very good, and The Predator is a tonal mess with a vastly overcomplicated storyline and bad editing. This takes what we know from the original film-that the Predators are aliens who hunt people for sport-and expands on specifically that.

3.5/5, give it a watch. There’s a BR disc, it’s part of the three-disc 4K collection, and it’s currently streaming on HBO.

Godzilla: King of the Monsters