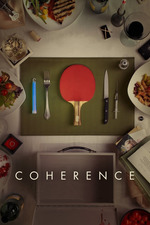 Holy fucking shit why haven’t I seen this sooner.
I need to look into this movie and watch it 10 more times.
I can’t believe how this was filmed, Like a fucking murder mystery, so insane. I loved how it was shot; the overexposure, the awkward zoom in and outs and the focus. It was jarring but worked well. I liked the lighting hinting at where they are originally from (red/blue/green). The comet shots looked amazing and I think practical too. Gah everything is so simple but is so well done it works.

With the dialogue being improvised allowed for it be one of the most natural I’ve seen. The actors themselves were good, it added to it that they aren’t stars we have seen. Having no script really showcased their skill and made it realistic.
The story telling Itself was clean and and coherent. With the concept interesting and mind bending.

Early on I caught onto the cuts to black are a switch into a new house/reality though I’ll have to confirm if this is a wanted interpretation.

I love films that make me think but this movie made me anxious and such feelings that a movie never has before. I can’t wait to watch with the directors commentary and with friends to watch them be just as mind boggled.

“If there are a million different realties, I have slept with your wife in everyone one of them”