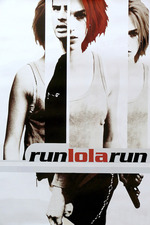 Lola has 20 minutes to change the world, to run faster and further and harder than she ever has before and ever will after, every moment where feet connect against asphalt sending reverberations across the world whose impact will be cascade in the most monumental and unexpected of ways.

Lola must run. To run is to affirm her power and agency, her mobility in the literal world of the movie giving her mobility in her life, the ability to retrace and reshape the world as best she can. Form and function meet one in Run Lola Run; the movie is ostensibly nothing more than technical exercise in how to reshape a single story thread multiple times over, but it is perfect in how it finds both intense suspense and profound humanity in the permutations of this story and in the navigation of the labyrinth of Berlin.

This is a film intensely aware about every aspect of it's form; even beyond the obvious repeating story structure, the mix of different mediums (including noisy digital handheld shots and 90s MTV-esque animation), the radically dynamic approach to editing (most pronounced in it's use of split-screen), and the seemingly endless branching narratives (including the glimpses of futures shown for some of those Lola collides with) make every aspect of the movie a self-reflexive, self-interrogating, endlessly vivacious experience.

What might be most crucial about the style is that there is no unnecessary justification for the film's organizing structure, no sci-fi framing device or mystical power granted to Lola that enables her to retry and reshape the world around her as frequently as she does.

This is a very good thing, because Lola doesn't need justification.

She runs to affirm her power, to take control over fate, to "play the game" until the results fall in her favor. She is justified for doing so because it is her will to run, because the expression of her self and her being literally cannot be contained; it must transcend mediums, gain clarity from the digital noise that most all of the world are subsumed within, and when Lola is at her more crucial moments and most overwhelming breaking points, the expression of her will and emotion literally destroys the constructed world she exists in just as it shatters the boundaries of fictional authenticity that film is perhaps most exemplary in constructing.

Lola exists beyond that, and the boundlessness of this world, this style, this story, and this fiction is impossible to fully behold.

Lola has power for expressing her will. Any logical leap or destruction of narrative form is justified for the power it brings Lola, for it is by overcoming all odds, by pushing against every boundary within the film frame, including the film frame, that her being is actualized and expressed.

She fights for her empowerment, to overcame fate and destiny and every limiting factor that may restrict the person she is.

Lola runs and she runs and she runs. She runs across time and space and through lives and within frames within frames beyond boundary. Death, time, and the limitations of the artistic medium are meaningless when the expression of her will is so boundlessly powerful, and that simple act of running says more than I ever could.

There is no power greater than the power of self-determination, and no force on this Earth more powerful than the force of will it takes to make that step yourself, each and every day, to live as you wish and to carve your own path in the world.

We all have the power to choose the world we want to call our own, and to shape the frames we occupy however we can.

What a difference a day makes!