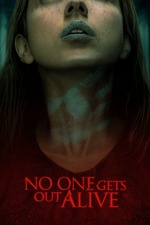 To start things off, I do somewhat enjoy the concept of this film. It's a very simple one, and I wish it had been expanded on more and have even been handled in a more interesting way. To me it felt like a very simple mystery/horror YA novel. The final reveal and payoff after the tension built throughout the film feels way too underdeveloped and doesn't pack as much of a punch as I'd hoped it would. However, I did enjoy some of the more violent moments in the ending of the film. I'm trying to avoid spoiling it, but those moments were fun and engaging in my opinion.

As for the technical aspects of the film, it looks fine. I'm not a huge fan of the color grading. It suits the tone of the movie, but it's just always been a color grading I've never enjoyed (not to say it can't be handled in a captivating way). The cinematography is okay as well, although it does feel like surface level, bare minimum "good" cinematography. Some cool shots here and there, but nothing that truly makes the film feel unique or interesting.

The scares sadly revolve around cheap ghost/haunted house scares. The ghosts look cool, but are also just generic as hell. They stand there and stare, never really doing much. It's mostly just a "ooh, look at the spooky ghost standing there being spooky". Some generic light flickers and other sequences that are kinda lame don't help either. With that being said, there was one scene in particular that I did actually find a little spooky, so I give them props for that. It was well set-up and the tension was there and worked.

The dialogue is also fine in my opinion. It's not awful, it's not great, but it feels competent. Besides the occasional bit of exposition (not to say it's a bad thing in this movie, I think it's okay), the dialogue works and is effective in moving the story along.

The biggest gripe I'd say I have with this film is the main character. She's fine, don't get me wrong, but it became a bit difficult for me to root for her after a while. I get that she has to deal with some shitty people in this film, but there are times where she comes across very selfish. This to me made it a bit difficult to care about her story at times, but I don't think it absolutely ruined the film or her character.

To close things off, I do want to shoutout one specific "villain" at the end of the film. It's gnarly and unique, and looks horrifying. You'll know what I'm talking about when you see it. As for the final verdict of the film, it's just okay. I know I didn't necessarily complain about a whole lot, but I just think the film comes across very bland and mediocre. It's nothing new or unique, but I think it's interesting enough to watch if you're bored or have nothing else to do.