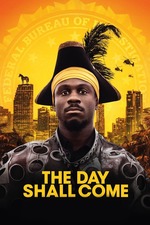 The Day Shall Come

Chris Morris is finally back, 9 long years after his incredible feature film debut, Four Lions, and once again he is examining terrorism through satire, this time through the guise of shady FBI honey traps.

This isn't quite as focussed as Four Lions, nor is it anywhere near as side-splittingly funny, but The Day Shall Come is still an incredibly entertaining and inventive comedy that demands to be seen if you fancy something a bit different.

Full of endlessly quotable dialogue, Morris once again manages to find the humanity and likability in a deeply flawed and idiotic protagonist, this time around portrayed by magnetic newcomer, Marchánt Davis, playing a shower curtain donning preacher who plans to lead a black uprising against white oppression.

It isn't quite Morris' most memorable work. Some of the fat could have done with trimming, but then other areas would have benefitted from further development, namely the preacher's relationship with his wife and daughter. But at the end of the day lesser Chris Morris is still more often than not genius work.