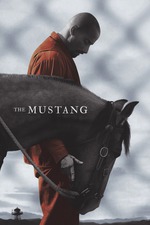 It’s always nice to see Matthias Schoenaerts move away from that period drama slump he was in a few years ago, back towards the Rust & Bone-type roles that deservedly catapulted him to fame. His unusual mix of brute physicality and soulfulness is well used here. It’s a perfect piece of casting, so much so that it’s hard to imagine anyone else in the role.

As for the the rest of the film... it’s fine. It’s certainly gorgeously photographed. The supporting cast are solid.

The narrative is where The Mustang falls down; a collection of half-formed ideas which all needed more development. It hits a lot of rote beats without saying anything new or interesting. The whole ‘incarcerated man = broken mustang’ is a little bit cheesy. Not a fan of the dialogue either; the strongest moments here are definitely the silent ones.

Not a bad film, but not a particularly good one either.