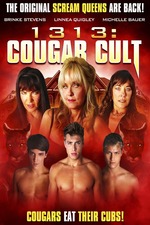 There was a moment, somewhere between minute three and six of a character hosing down his shirtless torso, where I had my first near-death experience.

I was lying on my bed, watching this piece of shit, when I realized the aircon above me might fall onto my head. It would squash my skull and I would die with bones in my brain. But death was not the thing I feared.

It was the idea that whoever discovered my maggot ridden corpse would see my computer switched on. They would replay the last movie I ever saw. And it would not be Ozu or Tarkovsky or Wilder. It would be not even be Cocteau. It would be DeCoteau. And they would watch, puzzled, as a young man writhed on his bed, rubbing his toned stomach for 8 minutes in nothing but tighty whities while two middle aged women caressed his legs and growled like angry cats. They would probably be sad and a little disappointed and would say something like, "ach sure, there's much better gay porn out there."

Forrest Ellsworth is a brave man, plumbing the depths of cinematic gutters. I'm sorry Forrest, I must admit my cowardice. I tried, but I can venture no further. You'll have the Malibu mansion to yourself, my friend.

Let the Right One In