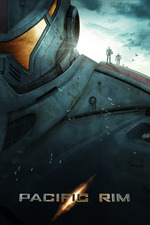 SOME MINOR SPOILERS AHEAD

It's with a heavy heart that I give this movie two stars.

I was gutted when I left the cinema. Guillermo del Toro is one of my favorite film makers. Pan's Labyrinth changed my life - it changed the way I looked at movies, it was my gateway drug into the wonderful world of cinema. I've been looking forward to this movie for over a year, looking forward to his next movie as director since Hellboy II.

Since I want to start off on a positive note, I'll say that it looks amazing. The CGI, the designs, look spectacular. Del Toro slides in some visual moments of humor like the ball bearing clicks or Ron Perlman's (yeah!) shoes. Cinematography was quite well done and I was never lost during the night time fight sequences. The score was also really cool.

I really dug the opening 10 minute prologue. It set the stakes well and raised so many interesting questions: how would the huge nations of the world, like the USA, Russia, Japan, China, Korea etc, work together whilst maintaining their own interests? How are Jaegers chosen? It also raised the issues of the use of propaganda and celebrity even in the midst of an apocalyptic war.

But then the story became cliched. And kind of terrible. I want to say again, I really wanted to love this movie. I tried, dammit, to latch on to things to like. I don't take any joy in writing this review.

1. Script. The dialogue was terrible. Sure, Idris Elba got to say "we are CANCELLING the apocalypse!" which was awesome. But everything else was corny exposition with no wit or energy.

2. Jaegers. Okay, this is an awesome idea. Imagine how devastating that would be, in order to save the world you would have to put not just yourself, but the person you love most in the world, in mortal danger! This means that the people best suited to become pilots would be soul mates - lovers, parents and children, siblings. The film pretty much missed out on this - I understood the bond Raleigh had with his own brother. But Mako and Raleigh? Why are they so deeply connected? They meet and she's immediately batting her eyes at him. What the fuck kind of character relationship development is that? There's another pairing at the end of the film which I won't spoil, but it was completely baffling insofar as I was asking "how the hell is this working?" which is probably not the right question to be asking at the finale.

3. Characters. Suck. Donkey. Wang. First of all, we hardly get to know any of the other pilots, except the stereotypical jock jerk and the two lovebirds. Raleigh is your typical handsome young white Jesus dude. Mako is the tits. Pentecost is the stern daddy figure. Charlie Day and Burn Gorman were in a totally different movie, which was way better than the main storyline. Also, I'm sick of the fact that Raleigh is the one who gets all the emotional moments with Pentecost despite the fact that Mako has the much closer bond. It's something that's been done in so many movies it's become a tiresome cliche. Because it means Mako, despite, I'm sure, Del Toro's best intentions, is just another one dimensional female figure - though at least Del Toro turned the lusting on its head and made her the voyeur instead of him - and at least he didn't put her in tight leather...though, that's the equivalent of saying "thanks for just making the character empty, and not insulting". Also, if she's so tough, why does Raleigh at one point have to "defend her honor"? Sigh.

4.Acting. Charlie Hunnam seems likable, but the way we walks with the cowboy thumbs hooked in his belt, the way he reads his lines, really rubbed me the wrong way. He is uber bland and fails to carry the movie. Rinko Kikuchi, who was the best thing in Babel, was pretty terrible and seemed to have no clue how to play any of her cringe worthy scenes. Also, once in the suit, she has about 3 lines and the camera is rarely on her side of the Jaeger. Hunnam and Kikuchi had no chemistry and every time they appeared on screen together, the dialogue and acting was so terrible and sappy I squirmed. The rest of the performances were okay (with Perlman, Gorman and Day making out the best), but the central relationship turned out to be a huge void because of sheer plot and dialogue stupidity.

5. Action. Neon Genesis Evangelion was fantastic at showing the dangers to the pilot in the mecha suits. Every punch hurt them and the action was heart stopping. Here, it's mostly two hunks of meat and metal punching it out. I didn't care.

I didn't care about any of the characters, and the story raised some interesting ideas and dropped them immediately. I'm glad to see that others have enjoyed it, and I really hope it makes a ton of money at the box office so that Del Toro has free reign with his next project. This was impressive technically, but unfortunately my love for Guillermo Del Toro cannot extend to this movie.

The House Is Black