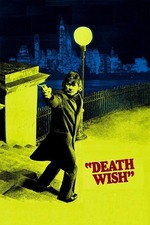 Three delinquents, including a young Jeff Goldblum as an oral rapist, send Charles Bronson into a vigilante rage after they attack his wife and daughter in their New York apartment. The former dies from the attack, and the latter becomes a babbling catatonic. Bronson takes it upon himself to clean up the neighborhood, and becomes an anonymous celebrity of sorts by baiting street trash into assailing him and gunning them down. A police detective figures out his identity, but is bringing him in the best course of action?

The lightly talented director Michael Winner manages to stay out of the way of his star and cinematographer Arthur J. Ornitz, allowing them to create both a gritty performance and look to the film. It is an immediate and grimy New York that has both a beauty and a menace. The film gets an assist from a great Herbie Hancock score, and plenty of gunfire and blood.

Though he still had many years and films ahead of him, Charles Bronson's best work was behind him when Death Wish was released. Unfortunately most of his subsequent fare didn't have this quality, and significant work that his peers continued to do would not find him. This is by far one of the better films of his last 25 years, but sadly it pigeonholed him as the middle-aged revenge seeking vigilante, and those films dominated the rest of his career.