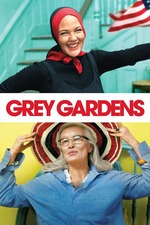 If you are someone who saw the original 1976 documentary film by the Maysles Brothers then you might be somewhat amused (confused, perplexed) by Michael Sucsy choices here. It's a kind of weird docu-drama via flashbacks which highlights (and literally lifts) the dialogue from the doc in the script. In doing so, Sucsy highlights Big Edie's party lifestyle and the break in the marriage to her husband (who was also the partner in her own father's firm although this is never explained) It's also never highlighted how it is that the brothers appear to be younger than Little Edie as children when they were in fact older than her. The virtual dilemma in all this truth that's stranger than fiction is what happens when Mr Beale dies and the Big Edie is directed by her sons to sell the property and move. However, because she refused to leave the summer house. The mother and daughter would instead carry on in an awful state of being mostly destitute for another 16 years until their cousin and ex-first lady, Jackie Onassis Kennedy along with her sister Lee. Paid for the clean out and somewhat minor repairs to the property so they wouldn't get evicted. What's crazy about all this was how this project evidently improved the state of things by making the house 'better looking' than it was and yet never digging into the saga beyond the nature of a reality star. Few seem to understand how bad it really was for them or how awful it really got. This seems to be more of a Hollywood homage to these once wealthy but misunderstood characters who seemed to be stuck in living in a heyday that the rest of America knew as the depression. Yet, without knowing the context. There's even more missing than explained here. Per usual, the steps taken to make beautiful people appear unattractive is kind of pathetic and yet it's also been a bizarre quirk of performers today going to great lengths to transform into another persons shoes. Here, I don't expect anyone involved had a clue as to what this was attempting to say. (Some have called it a love story but I'd argue that there's a degree of mental illness involved which hardly condones a parade) Overall, it seems to imply that we can indulge a happy ending in what lacks a poorly conceived homage to what most people would recall as a freak show.

No End in Sight