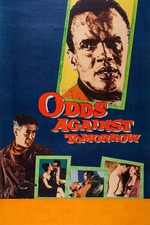 Harry Belafonte selected Abraham Polonsky to write the script, which is based on a novel of the same name by William P. McGivern. Blacklisted in those years, Polonsky had to use a front and John O. Killens was credited. (Polonsky's screenwriting credit was restored in 1996 to his own name.)
The plot revolves around David Burke (Ed Begley) who is a former policeman who was ruined when he refused to cooperate with state crime investigators. He has asked Earl Slater (Robert Ryan), a hard-bitten, racist, ex-con, to help him rob an upstate bank, promising him $50,000 if the robbery is successful. Burke also recruits Johnny Ingram (Belafonte), a nightclub entertainer. He doesn't want the job but is addicted to gambling and is deeply in debt and gives in when Burke puts pressure on him through his debtor. The film also co-stars Shelley Winters, Gloria Grahame and includes a cameo by
Cicely Tyson The film score was composed, arranged and conducted by John Lewis of the Modern Jazz Quartet who assembled a 22-piece orchestra, which included MJQ bandmate's Milt Jackson on vibraphone, Percy Heath on bass and Connie Kay on drums, as well as Bill Evans on piano, and Jim Hall on guitar. The underbelly of this crime thriller is an allegory about racism that's certainly been overlooked since its original release. I'm not sure why this hasn't been given a thorough re-release but it's by far one of the better noir films of its time.

Errementari: The Blacksmith and the Devil