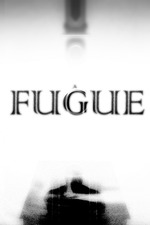 I wouldn't say Charles Jimenez is a friend of mine since we don't know each other that well but he is an acquaintance and I've known him as a consumer of art first, only finding out about his own creations later. Especially his photography which includes some works that I genuinely love. The way he captures abandoned places while giving them an unnerving and a bit surreal feeling is something I like about him. So, while I had no idea what to expect from his 11 minutes animated short A Fugue I was kinda hoping for that sort of style.

What I like about this short is mostly visual. The low contrast grey is a nice stylistic choice (that, unfortunately, gets a bit butchered by streaming service's compression). I was less interested in the character and more in the setting and the shapes in it. Some frames are great but overall I can't say I felt much of a connection to the piece. It's surreal, yes, as most of Jimenez's work tends to be, but it fails to deliver a certain purpose to me. Aside from the ethereal visuals, there isn't much that grabs me and makes me want to dig deeper or spend more time with it after the 11 minutes passed. Artstyle aside it seems a bit bland to me for lack of a better word.

I respect his drive to realize his vision through his artwork and I respect the consistency of tone in A Fugue but I can't say the visual style and atmosphere were strong enough to make up for the missing intrigue of the message or motivation.