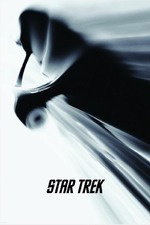 Smarter people than myself have pointed out, ad nauseum, that the Abrams movies aren't really Star Trek. Those smarter people are right. I am no Trekkie, but I have an affection for the original Star Trek series that is shared by any geek born in the early 1970s, and who therefore had only Trek and Space 1999 available for their after-school science fiction fix. You damn Millennials and Zoomers, with your General Planet and your Pokechus and your Dragonnuts Zeem don't know what it was like when you had three channels total, and the odds your local UHF station's program director would buy an anime series were 50-50: either Jack or Shit. But I'm already getting off the thread here.

Star Trek was utopian science fiction about a human race that had learned to live in peace and master space travel to wander the stars and protect the universe from Harry Mudd's syphilitic robot hookers. Abrams's Star Trek is about poking you in the ribs and muttering, "Remember this?" in your ear while blowing a bunch of shit up, in front of or behind lens flare.

That doesn't make Star Trek a bad movie. It's actually a pretty fun space action flick, with some performances that are solid and fun in spite of the fact that they're strongly reminiscent of their television counterparts, many of whom were middling actors on their best day. Sure, it's as dumb as a sack of tribbles, and contains about as much science as the Necronomicon, but it's still a decent space shoot-em-up. You know, provided you don't hold the original Trek in higher regard than say, Doom, where Satan attacked Mars.

The most ingenious thing that Star Trek did was coming up with the concept that Nero's arrival changed history and split it off into its own timeline. It allows new stories to be told without contradicting any of the old ones. Which is fine for me, and enough to buy into it, and allows me to avoid attending Comic-Con panels devoted to people shrieking at the Roddenberry kids about these movies, like they wrote the things or fingerblasted Yeoman Rand after they asked them to prom or something.

Sure, the whole Red Matter Deus Ex Machina is about as science fiction as fairy dust, and the ridiculous coincidence of Kirk being marooned on the same planet as Future Spock beggars belief. But Chris Pine is winning as hell as a cocky young Kirk, with all Shatner's balls and little of his diplomacy, Zachary Quinto is a perfectly acceptable version of Spock, and my God, Karl Urban as McCoy and Simon Pegg as Scotty not only give great impersonations, but they bring some fun comic relief to the whole deal.

And you know something? I really liked Eric Bana's Nero. How many series and movies have we spent with military standoffs and big governmental diplomacy in Star Trek, anyway? It's kinda refreshing to see a regular working dude with a grudge, who, purely by coincidence, just happens to have brought a case of mining explosives to a neanderthal's stick fight. He doesn't give a shit about rank or protocol or anything else, he calls everyone by their first name, and his tactics are those of Hand Grenade Man from The Tick: I Have a Hand Grenade.

This movie isn't for Trekkers, but it is for people who like the original Star Trek, and who like space fight movies, and those are my people. Now, Star Trek Beyond is for Trekkers, and Star Trek Into Darkness might not be for anybody, but considering these movies comprise half of my 4K Blu-Ray collection, I'm sure we'll be talking about them soon enough.

Hey, if nothing else, Kirk finally got to lay into a green chick. No matter what you remember from the original series, that never happened. Abrams thought we wouldn't notice. But we did.