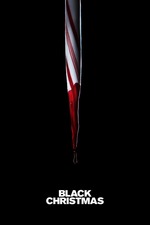 Oh boy, what a trainwreck.

Sophia Takal is a very talented and promising female filmmaker who has already successfully tackled the politically aware/feminist genre thriller in the past (Always Shine is excellent). The franchise vehicle of Black Christmas should be well-suited to her style but unfortunately this movie is immediately dead-on-arrival. I blame Blumhouse more than Takal. They gave her such a tight window to write, direct, and complete this film to fit their release date that I think many issues with this film could have been smoothed out during a normal pre-production schedule. I think there's some material and themes here worth exploring but they're delivered in such a ham-fisted and clunky way that the message is ultimately hampered and rendered inconsequential.

First the good, I really enjoy Imogen Poots as an actress and she is very good here. I actually think she gives the only good performance in the movie (which is probably due to a small budget and only getting bit actors to play alongside her). Cary Elwes seems to have forget about how to act since hamming it up in the Saw franchise. Overall, performances aside, the characterizations are so messy and inconsinttent that it gets in the way of some good things, such as Imogen Poots character, which conceptually and at first I enjoyed and felt was good for the kind of movie they wanted to make, but was frustrated by the overall trajectory of her character.

A feminist horror movie is absolutely valid. I welcome it. I would love to see what Sophia Takal does next. I just think this didn't need to be a Black Christmas remake, it didn't benefit from a rushed production schedule. This could have benefitted from several re-writes that would make this film much more cohesive. I really wanted to enjoy this but unfortuantely it was one of the weakest movies of 2019 for me.

Finally, a sidebar, the trailer did this film no favors. There were plenty of moments that I think would have been more effective had the twists and surprises not been spoiled for me by that trailer. I wish I could have gone into this blindly.