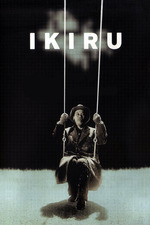 I’ll begin my saying that Ikiru is the closest thing to being perfect in every way that I’ve seen in a feature film. And so I’m gonna do something slightly different for my review this time around.

I’ve never really opened up to what I’m about to confess about my life, especially on social media. And so I am sorry if what I write appears like a stream of consciousness or unformulated, or nonsensical but I’m gonna give it a shot anyway:

When I was 10 years old, my aunty randomly passed away. The doctors didn’t know why, and the only evidence to suggest why she could have died was a slightly raised cholesterol level. But for no apparent reason she passed. I was so fucking close to my aunty I can’t actually describe it. She was one of my best friends, and I feel so fortunate to have even known her for the years that I did. Her name was Sarah, and she was a teacher in Ludlow. She was genuinely an angel. The most beautiful, radiant human who filled my young years with genuine joy. She kick started my love for film, along with my mum and dad, and she’d watch the strangest films with me and show me the weirdest albums and just fill my world with colour. I cannot begin to explain how much I miss her.

Ikiru, and it’s wonderful, haunting intimate vision on the human condition has brought me the closest to my own grief as I have ever been before.

However, what came after her passing has been a world blighted by anxiety. The event of her passing though, I believe, was the catalyst for the anxiety that has - and I am open to admitting this - controlled and seized my life for the last 11 years. It began with this strange fascination with stomach aches, and then moved to emetophobia - the fear of being sick - and specifically worrying about cancer and this fear became so irrational that I couldn’t leave my room sometimes, I wiped my mouth with my sleeves, I didn’t go to the toilet all day, I’ve intensely questioned my friends when they’ve had stomach aches or thrown up in an attempt to try and control my anxiety in pinpointing the exact moments I was around them in previous days to try and ensure I didn’t get sick, I’ve been so anxious that I have wretched and vomited, and I have lived a life which has had a large percentage of its colour taken out. And that pains me more than anything in this world. To think I have wasted so much time on being anxious; being anxious of losing control, being nervous to go and try things that I wouldn’t normally, and living a life that has stopped me living to the fullest.

I’ve had therapy. I still sometimes use it. I use headspace. I don’t overly drink. I sometimes can’t even eat certain meats. It’s controlled my life.

And yet, I attempt to relish in how fortunate I am to lead the life that I do. To have the family and friends that I do and the ability to lie in bed and watch films like Ikiru. And film, interestingly, has become my therapy. Not just as an escapist medium, but as a creative outlet too. I am certainly ‘less’ typically anxious then let’s say 15/16 year old me, but in other ways I’m more anxious than ever before.

I connected with Watanabe not only on an emotional level, but on a physical and spiritual one too. A few moments spring to mind; when he first learns of his illness and twice has a moment of wanting to tell his children and twice being unable to do so; of just relentlessly having this grey haze seeping and bending through the world around me; of feeling deeply existential and unsocial in moments of crisis and panic, and also in moments of normality too. Kurosawa captures these exact moments so perfectly, and Takashi’s performance is simply beyond reckoning. Lighting too plays such a major role in the film, what is in the dark and what is seen is achieved so beautifully well.

I think part of the point of Ikiru is sometimes there’s more behind someone’s actions that meets the eye. Retrospect is a powerful thing. Everyone around Watanabe creates rumours of his whereabouts and generates false accusations of him, and we live in a world where this too is so prominent. I’ve been accused of being inaccessible to even my closest friends and family, for what people mistook as me being rude or insensitive, but ultimately it was to do with my demons and my own anxiety. But we, and I am certainly a part of this myself, create stories about others that are simply untrue. We are so quick to judge those in society when we don’t realise the true nature of what is going on for people. We all have our own battles and I think we have to ultimately be more respectful and understanding that everyone has their own trauma in some way or an other. And I also understand that anxiety, or worrying about illness or struggling with illness, is a hidden demon and so sometimes the people around us can’t understand or come to terms with our actions. But it’s imperative that we try.

I guess what I’m attempting to say is that we are all so fragile, and all so important. I don’t know where my particular life is leading, but after Ikiru, and after this brilliantly torrid year I feel it is in the correct direction. My anxiety will continue to be a major part of me, but I feel prepared and strong enough to admit that that is just part of me. That that is who I am, and there is no escaping that. I’ve learnt that the worst parts of life are when I feel my most human. We live in a world blighted by difficulty, trauma, evil and so much corruption and inhumanity both internally and externally. And we must be prepared to fight that and have those battles.

Life is ultimately so precious, and I’m starting to learn to live it to the fullest. It just takes a while sometimes to get there.

The Gangster, the Cop, the Devil