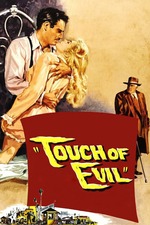 I definitely missed something. I watched the "Restored" version or whatever the version that followed Welles' Memo. So, this is probably the best version that is going to exist right?

The acting was pretty good overall. Janet Leigh was so good. If she wasn't so charasmatic and into the role, her character would probably feel a little flat. Anytime Orson was on screen I had a huge grin. The man was a great actor and he was just so funny in this. I can't tell if he was really drunk but he sure looked the part.

Charlton Heston sucksed big time, but maybe its just a personal thing. The guy was a humungus piece of shit. Also just not the right actor to cast as Vargas. Like, obviously Charleton Heston can't pass for Mexican, but he just can't deliver dialogue without looking and sounding like a total dickhead. Glad the fear mongering, fascistic, needle dick, prick is dead.

Of course, the movie is very well shot and impressive in its vituostic camera work but being so gorgeous couldn't keep me interested. Welles certainly had a very good sense of where to put the camera.

This is where I think my lack of experience with noir factors in. I just could get invested in the story because it was just so unevenly paced. Its not like the structure is all that unconventional, its just the flow and focus of the scenes lacks a certain cohesion. I just struggled to really struggled to connect with the film and its events.

Worst of all, I just didn't get anything out of the movie. I didn't really pick up many themes beside those like, moral disillusionment, the decay of society, that appear in noir films. I'm not to familiar with noir outside of textbooks, essays, snd general osmosis so maybe I'll have to watch more traditional Hollywood noirs before coming back to this.