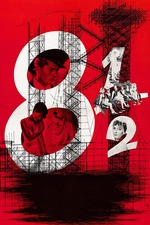 With the virus kicking about, putting everyone inside, I thought now would be an appropriate time to watch a film where nothing happens. Seems to me that is all everyone will be doing for a while, so I might as well settle into that mood, by putting on 8 1/2.

When I first saw this, I really couldn't get past the first scene. It was one of the most jawdropping and mindblowing things I had seen in any film, during my seriously getting into film days. I took an Italian Film Studies course, that opened my eyes to European cinema, and this film was the one that changed the game for me. It's one that I come back to, it's not a hard and fast rule, but I try to see it once a year, since I've got the ability too.

Like all things, it stays the same, but I see different things in it, the more I change, learn and grow as a person. Needless to say, whenever I see it again, I'll find new and exciting things I missed before, or didn't leave the impression that other parts did.

It really is the opening, beyond the first scene, that puts everything out in the open. Seeing the film multiple times, it's the little things you pick up on, that make you fall in love all over again. It feels like the director is putting something in there, just for you, as silly as it may sound.

Is this the greatest film about making a film? I've never been good at answering the question I ask, but it's probably up there. It has to be one of the best films about the creative process, the crippling weight of doubt and uncertainty, that can put you on your back. Seeing 8 1/2 this time, I saw a few films that drew inspiration from it.

Also, I came away with a clearer view of Guido. He is every guy, but also one of the more unique protagonists. Who doesn't retreat into themselves, and their memories? The countless dream sequences, highlighted by the big two, you know which ones, are the stuff of legend.

I'm sure if I was even more pretentious than I already am. I would do a video essay about them, but I'm not that guy and I'm sure someone else already beat me to it. It's truly hilarious how he's every guy, and how many Woody Allen films just riff off the character and film. Down to the glasses, Fellini should have gotten royalties like he was a singer from yesteryear that won a copyright lawsuit against a pop star of today.

Since everything is hyperbole on the internet, in order to rise above the mindnumbing nature of the infinite scroll, every time I see Fellini, I come away saying he's the one for me. But then again, I say that after watching any great film from the hall of fame.

I haven't seen La Dolce Vita yet, because out of ego I refuse to pay for it because it's not on any streaming service. Well since it's the end times, I guess I might as well.