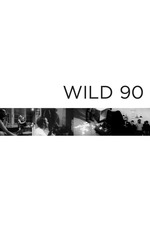 This is likely the most self-indulgent, grating dumpster fire of a “film” I’ve ever had the displeasure to sit through in its entirety. There might be worse movies out there, but I shudder to imagine the possibility of their existence. Shot in vérité style on 16mm by documentarian D.A. Pennebaker in late-60s New York City, I was hoping to encounter a crude but precious gemstone of the independent, experimental American oeuvre, but instead stumbled upon a calcified turd.

Even more maddening and intolerable than what I previously considered the nadir of cinema, Don’s Plum, Norman Mailer drunkenly apes his way through 82 minutes of an unimpressive array of slurs, smirking insults and threats, and passages of unintelligible grunting in Wild 90. Loosely about three gangsters holed up in a Brooklyn flat for “various vague reasons”, Mailer as The Prince directs, produces and stars alongside buddies Buzz Farber (Cameo) and Mickey Knox (Twenty Years). They incessantly volley profanities and barbs, with Mailer attempting to steer the completely improvised dialogue with ham-fisted, winking provocations. He regularly preens in front of a mirror, seducing himself as he obsessively brushes his hair, and takes to barbarically breaking props, punching at whatever surface is afforded him, and inciting argument after excruciatingly tedious argument with his cast-mates. Mailer’s affectation and delivery are simply abominable. His fourth-wall-breaking finale was as anticlimactic as they come, but not nearly as alienating as everything that precedes it. Watch this piece of obscure, queasy history at your own risk.