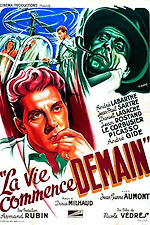 André Bazin once remarked about an earlier film of Vedrès’: “Why do chance and reality have more talent than all the filmmakers in the world?”

A slight criticism to which Vedrès rebuked with a later statement saying: “In my opinion, history is a field that can only be grasped through imagination”.

A back and forth I can see both sides of. In this particular film’s earliest moments I thought there would be a chance of true experiential cinematic travel. After a bit of an absurd opening involving a helicopter, the protagonist stumbles into what feels very much like an untouched or dolled up production...a smoke filled bar with musicians playing. And for a moment everything feels very much of the moment, that is until the score comes in, and some stilted dialogue. Again on Vedrès’ imagination side this can’t help but be a product of the time, which I found myself forgiving as the main characters starts to encounter some of the greatest minds in Paris. Some revealing (Sartre), many less so (I feel like they didn’t even let Picasso speak, possibly for good reason lol). But what starts out as an earnest exploration of a cultural moment and a potential future to come, quickly becomes a mostly didactic bore.

Worth the price of admission for conversations with Sartre, Le Corbusier, and Jean Rostand. Also interesting to see the essayist influence and almost confrontational use of war imagery in her students Chris Marker and Alain Resnais.