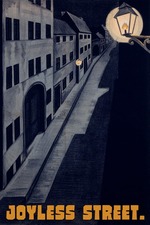 Starring a young Greta Garbo in the role that launched her into prominence. The Joyless street is an interesting look at post-war Vienna, during a period of Hyperinflation, where the poor struggle to get by, while the rich profit off of the suffering of others, with little regard to who they hurt in their pursuit of more wealth. The corrupt butcher holds the poor by the neck, and forces women to perform sexually to get meat. Many resort to street walking. A bummer of a movie. Well shot, and an interesting role for Garbo. Ultimately though its overlong at 2.5 hours and some of the subplots are hard to follow.