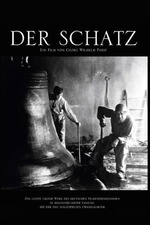 G.W Pabst feature film debut. A goldsmith is contracted to help a bell maker, and he lives with the man and his family while he works, falling in love with their daughter. The bell makers apprentice meanwhile, searches for a buried treasure rumored to be in the area, and he believes it is in the house. The goldsmith hears the rumors himself and attempts to find the treasure with logic, discovering it in the foundations of the house, but working with the Bellmaker, the apprentice takes the gold for himself, before trading his share for the bellmaker daughter. When the goldsmith finds they took the gold, he demands his share, but the daughter convinces him to let it go and they leave together. The apprentice, greedy for more gold, continues to dig in the foundations until the entire house collapses, killing the greedy three, while the goldsmith and daughter happily walk away. Slow start but nice story and good ending.