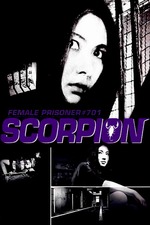 Coolness is not easy to pull off. It has to be effortless. The moment someone appears to be trying to be cool, it'll never work. I want to unequivocally state right now that Meiko Kaji is the most effortlessly cool person I have ever seen in movies. That icy stare can't be topped. The wardrobe deserves to be highlighted here as well -- near the end of the film she finally stops wearing a prison uniform and the all-black outfit she replaces it with is remarkably striking.

There's no doubt the writing isn't great. Women in prison are abused and eventually Meiko Kaji's character, the one who is treated the worst, gets her revenge. Given the requirements of pink films, it's gratuitous how everyone immediately rushes to tear the clothes off of women. But there's so much talent everywhere else. This mediocre script is filmed in such unique ways, making it feel far more original and exciting. The cinematography by Hanjirô Nakazawa is just unbelievable at times, elevating everything with interesting blocking, strong use of colors, and many stylistic flourishes.

I recognize that I tend to complain about action movies or anything else "lowbrow" for reasons that aren't necessarily fair to said genre(s) on their own terms. It's for that reason that I get even more impressed when something can succeed at making my lizard brain take over and gleefully celebrate the violence and revenge. This movie is dumb and awesome.