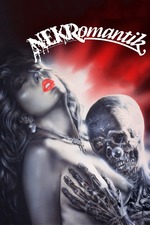 8 1/2? Barry Lyndon? Gone With the Wind? Could y'all please leave me alone with your obscure weird stuff when I haven't even seen enough of the canon to know Nekromantik yet?

Well, today is the day that I learn about the classics. There's a rating attached to this review because I have an uncontrollable need to rate everything, but this is another movie where rating feels pointless.

It may come as no surprise that Nekromantik is transgressive. There's a lot less sex with corpses than I expected, but there certainly is more than most films will give you. The title isn't just clever wordplay -- this is necromanticism, not necrophilia. And I'm not afraid to admit that I can't help but find it funny. Of course it's a terrible violation and quite gross, especially as that's one slimy corpse, yet it's treated exactly like a corny softcore porn scene. The soft, fragile beauty of the soundtrack, the gentle caressing of the bones, the time spent cuddling and reading to the body, it's all too ridiculous not to enjoy. When it's not too mean-spirited, I love trash that revels in being trash.

There are some surprisingly artsy aspirations, too. It's a quiet examination of a mostly meek man who, despite his terrible disgusting habits, is being kicked around by life. He doesn't handle interactions with the living well. When he loses his job, his wife leaves him in an instant for being a "loser." Nevermind that it must surely be difficult to find another man willing and able to provide corpses to attach makeshift penises to. Even in Nekromantik it's easy to see threads about the destructive outcomes of tying people's value as human beings to their ability to work and earn money. There are also scenes about how desensitized people are to violence on the screen, which is... interesting coming from a movie as designed to shock as this one. And the presentation throughout remains calm and passive, juxtaposing serenity with disgust. I don't always love it but I respect it more than I anticipated.

The low point is just the rabbit scene by far, which lasts too long and we're even forced to see it twice. There's a part where a man kills a rabbit, drains its blood out, and we watch the full process of skinning and gutting it. This appears to be either implied as something that leads to our character reaching his current state or just a comparison point between animal slaughter and the way he views human beings. Whatever it is, it's unnecessary and, because it's so clearly real, I just don't like to watch a rabbit get killed and torn apart. If we assume the goal of Nekromantik is to shock or upset the audience then sure, mission accomplished in a way, but I'll always make a hardline distinction between showing ANYTHING in a movie which is faked (which, given proper justification, is always fine) and actually showing real death or suffering of things. In the movie's favor, I've learned that they used archival footage rather than killing a rabbit for the film, which I'm quite happy to learn... but I still don't want to see it, and my thoughts on this movie are always going to be heavily clouded by its inclusion. It is what it is.

For sort of a morbid curiosity watch, this had more going for it than I expected. I think you already know if you're interested or not.