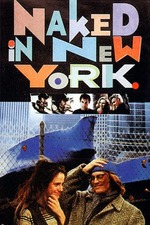 Naked in New York is a very strange little film. I had to watch it a few times to really grasp what I was watching, but in retrospect, I think I might not be as sharp as I fancy myself.

The best way I can describe this film is if a Woody Allen film didn't have an obnoxiously nebbish, sniveling, horrendous Jewish stereotype (and sex offender) as a protagonist. Jake is definitely an anxious and damaged individual, but this is at least perfectly justified by context. No character in this film is painted as being a particularly 'wrong' or 'malicious' force- everyone simply exists within the same planet with their own motives. Joanne is not characterized as a one-dimensional foil to Jake- this film does a magnificent job of being able to just make the point that people make mistakes, say the wrong things, and come across conflict without there needing to be any underlying conspiracy or extreme takes on morality.

It's a very quirky, but moody film. There's stressful conflict, I had many instances of silently cursing characters for making clear mistakes (that maybe only the audience can recognize), and just enough subtle, but off-center and surreal humor to tie it all together nicely. I'm quite disappointed that it never gained much traction at all- it's become a favorite film of mine, and I seem to notice new little details or take on different perspectives every time I rewatch it. Things build momentum and seem to take a positive direction, until you can see that insecurity and doubt gets the better of our characters, and everything begins falling apart until everyone's unsatisfied, hurt, angry, or some combination of the three. But it doesn't really end there.

It's quite existential. The film ends on a bittersweet, neutral note- nobody really wins, nobody really loses- because life goes on, and while there will undoubtedly be times where you run into loss or failure, there will always be opportunities for success, righting wrongs, reflection, and new inspiration. I liked that a lot. I've always liked the idea of this film having a continuation, but it feels wrong to take away the note it leaves you on- how are we supposed to know how life will go? Do we have any right to assume? No, and that's why Naked in New York is such a great metaphor for life. Maybe not a terribly subtle one, but it delivers the message in a very appealing way.

Characters have very natural arcs and development, and the chemistry Jake has with each figure in his life is distinctly different. Lord knows that I wish things took a happier turn after one specific interaction with Chris- things really seemed to all head downhill after that point. Jake is extremely insecure, and acts out of panic- it doesn't deter from his likability, but it's a glaring flaw in his being. It does not sit well with Chris's own insecurity, hypersensitivity, and hidden fiery temper.

The soundtrack is, as the film itself, moody and quirky. Many tracks from forgotten or otherwise overshadowed artists and bands of the early 1990s- this film actually acted as a means of me discovering a lot of interesting music I wouldn't have otherwise found.

Naked in New York is an artsy, engaging, unusual romcom that deserves a lot more praise and attention, if you ask me.