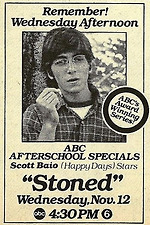 It just isn't as stupid as I wanted it to be! It's stupid and full of every cliche I expected (and wanted), I had a couple of laughs, don't get me wrong- but it just isn't stupid enough to be consistently entertaining. The worst thing you can possibly be is boring. I did appreciate the female lead being named Felicity and making an issue out of how much she hates her name when the actress's real name is "Largo", and also Scott Baio looks like a shovel.

No, I'm not giving this a serious review. Have you fucking watched this? Obviously it isn't a good thing to take at face value for moral or educational purposes (that's why I wanted to watch it), but it isn't even dumb or ridiculous enough to be truly funny or entertaining, and for that it gets a measly one star.

Just avoided getting a half star because psychedelic-print shirts magically appear in the lead's wardrobe the day after he smokes weed for the first time, the lead and his ex-bully(?) getting STONED to a song about getting STONED and singing about how STONED they are, on top of the film's title itself being "STONED", and also it's Scott "The Shovel" Baio doing it.